Styby showed great form in GVA race in Lille. He fought like a lion for the win and he lost it at the sprint with Sven Nys.

They were together at the head of the race almost from the beginning. „I felt 1000 per cent better than in Maldegem. It is a shame, that I did not win first race in rainbow jersey, but I am happy, that I was able to fight for the first place till the end. I showed to everybody, that my form is still very good,“ said Styby.

„I felt not so good at the first half of the race, then I had a puncture of back wheel. I changed bike with wider tyres and it was much better. I believed for the win, but I made a mistake at the sprint. I went to the last metres from the first place and Sven had little bit more power. But I ma happy with the second place and my form.“ 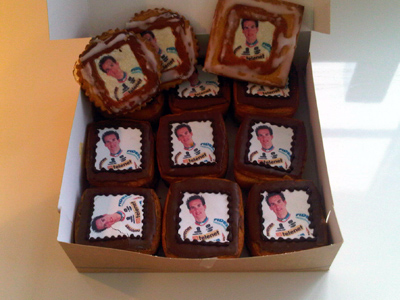 Styby got a present today morning from his friends in Essen bakery. „They got me some cakes and surprised me. Thanks a lot...“

Styby is the thirs in general standings of GVA. But he has the same points like second Niels Albert. „We will fight for the second place in Oostmalle, Sven will probably controll his overall win.“