To party in Ferrari

Styby did not celebrate world title in Czech republic too much. Few hours after the race in Tabor he had to fly to Belgium by charter to Brussels with Telenet Fidea team sponsors.

The plane landed in Belgium about 10 p.m. Styby was invited to cockpit together with Ine and they watched landing. „It was very nice,“ he said.
Then he hold the press conference in Sheraton hotel, there was a lot of fans and media representatives at the airport. Team chief Hans van Kasteren took Styby’s parents to the plane too to be together there with his family.

He did not sleep too much and the other day started everything again: visit of the sponsors Fidea and Telent, Styby met there tenis player Yanina Wickmayer. „We signed a lot of posters, I had a quick lunch and we hurried to two TV. I recorded there a TV spot for Superprestige in Zonhoven and then wen went to another TV for live show. I was there with Ine, I was not sure by my Flemish, but I made it without problems:)- 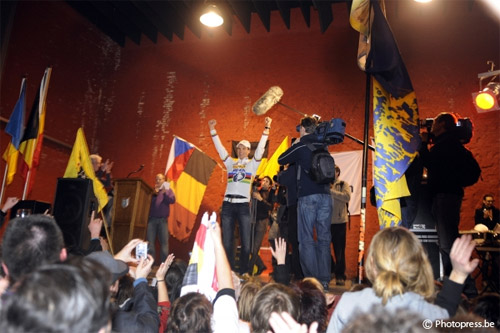 After that Styby went to Essen, where was the big party for the fans organised by town hall. „There was about 500 fans, Hans lent me his Ferrari and I arrived there in this nice car. A lot of people came there: most of our team, fans, people from Czech embassy in Brussels and also for example Erwin Vervecken. I got a big gateau about one and half metres big. It was really nice.“

Stybymania is not only in Czech republic, but in Belgium too. Today’s GVA newspapers published one page only from Styby’s Monday activities with a lot of photos.

„I did not have time for training, but I have to go today. I am looking forward to the bike, although here is raining now,“ said Zdenek.

He will ride in Maldegem on Wednesday, for the first time in rainbow jersey of the champion. On Saturday he has GVA race in Lille and on Sunday Superprestige in Zonhoven. Four races during the one week...By on 02/02/2010